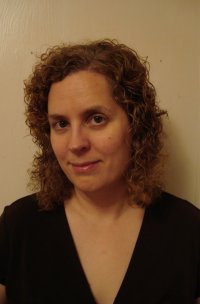 Jen Michalski’s novel The Tide King is forthcoming from Black Lawrence Press (2013; winner of the Big Moose Prize), and her collection of novellas is forthcoming from Dzanc (2013). She is the author of two collections of fiction, Close Encounters (So New, 2007) and From Here (Aqueous Books, 2013). Her work has been nominated for the Pushcart Prize. She also is the editor of the anthology City Sages: Baltimore (CityLit Press 2010), which won a 2010 “Best of Baltimore” award from Baltimore Magazine. Finally, she is the founding editor of the literary quarterly jmww, a co-host of the monthly reading series The 510 Readings and the biannual Lit Show in Baltimore, and interviews writers at The Nervous Breakdown.

So many forest green Dodge minivans have been produced that they have become part of the North American landscape, as ubiquitous as shopping malls and Enterprise rent-a-cars and fast food restaurants. That’s what Yuri is thinking when one turns off the thoroughfare and pulls to a stop on the sidewalk beside her and Dim-Sum, her Frenchie. She is not inclined to give the minivan, or its place in American automotive culture, a second thought, but then the driver’s side door opens and the black man gets out.

“Excuse me.” He is in his fifties, ample in a way that makes his black velvet sweat suit look like comfortable furniture. “Do you know of any dumpsters around here? We have some trash we want to throw out.”

“There’s a contractor right there—I’m sure they have a dumpster.” Yuri points behind her, where one block over a house is being renovated. The neighborhood in which she and her fiancé rent is on the verge of gentrification, perfect for residents, close to the hospital, to the thoroughfare—at least that’s what the rental agent had told them.

“Yeah, but they’re a little weird about that,” the man answers. The van is emptier than she would ever imagine a minivan to be—even when lacking in riders, they always seem to be cluttered with crushed juice boxes, cheerios, crayons, and indeterminate stains on the upholstery. The passenger door opens, and the white man, also in his fifties, although not as ample—perhaps a loveseat rather than couch—climbs out. He wears a pastel-striped Oxford shirt that accentuates his pink, Droopy Dog face, and a white t-shirt underneath. In the well of the front passenger seat Yuri spots the detritus of lunch from McDonald’s—two collapsed white bags and waxy drink containers the size of liter bottles.

“What a beautiful dog.” The man with the pastel shirt points at Dim-Sum. Dim-Sum, the color of butterscotch and wearing a pink collar made of hemp, is used to the attention. Yuri and her fiancé joke that she would probably let a burglar in and offer to fix him a drink.

“She’s got some age on her.” The driver, Black Velvet, has made his way around the van to them. Dim-Sum sniffs his outstretched hand, which seems as big as those rubber garden gloves she sees at the home improvement store, before losing interest. It is hot, spring hot, a warmth that feels safe but fleeting. Yuri can see every pebble, the size of oblong quarters, on the sidewalk.

“Is it a terrier? Pastel Shirt asks. He speaks in a halting/speedy pattern that she attributes to being from the South or perhaps developmental delay.

“A French bulldog,” Yuri answers. Already she has been here too long. She feels her limbs shrinking inward as she recoils from their overbearing friendliness. At the hospital, they are all like this, the patients, offering details of their lives like so much clutter that she wades through to listen to their heart, take their pulse.

“There’s a dog park in Hampden where I used to take my Rottweiler,” Black Velvet says. Because of his girth, his arms arc away from his body like a gunslinger’s. Alternately, he looks as if he might flap them and float away. Instead of this, he reaches toward his back pocket. “She died. Broke my heart. Sweet Lord, I never, ever cried so hard, I tell you what. It was like…human love, you know?”

“My Chihuahua died at three months,” Pastel Shirt adds, nodding. Yuri wonders whether they are partners. They are too chummy for coworkers, too enamored of dogs. Too soft and harmless, neutered just like their beloved pets.

Black Velvet brings his hand around from behind his backside. It’s holding an iPhone. “You gotta see some pictures of my baby.”

His finger, the width of a sausage link, flicks over the photos. Dim-Sum begins to pant and pull away. Yuki decides to stay for only a second, a courtesy. She will only pretend to look.

“Can you see from there?” Black Velvet waves her closer to the van. “It’s so sunny.”

“I can see fine.” It feels like hours since she has spoken, since she has been with these men and their ambiguous relationship. She wonders if passengers in other cars note their meeting, whether they note anything at all. Like the way Black Velvet is standing so close to Yuri now. He smells like exotic oils that her mother used to buy from Eastern Market. His breath is wet and audible as he holds up the phone.

“See now, here’s my baby.” He shoves it into Yuri’s face. She is expecting pictures of a dog in the prime of its life, bounding in the muddy trenches of the dog park, chewing a bone by a sofa, or just looking regal, paw over paw, in the sun-bleached air. This Rottweiler lies on a steel veterinary table with a white sheet draped over half its body.

“I’m so sorry,” she says. She means it. She has a picture on her iPhone of sweet Pooh right after the same injection. It is the last picture she has of their life together, and she can never look at it without crying. Most importantly, she knows how weird it is to keep it and therefore never shows it to anyone.

“And here’s my Chow.” He flicks through some more pictures. To her relief, the Chow is alive. “But I loved my Rottie. I don’t know if I could ever, ever get another dog. Sometimes they just touch you. You know what I mean? They steal you, I swear. And that little part of me,” he thumps his chest for emphasis, “is gone.”

What kind of people, she thinks, turn off the thoroughfare just to throw away two McDonald’s trash bags?

“Dogs are God’s creatures,” Pastel Shirt says. He wipes his hands on his hips, his grey sweatpants that remind her of soggy bread. By her side, he hears Black Velvet’s labored wheezing, like an oxygen machine at the hospital. The back door of the van is open. She doesn’t remember anyone sliding it out. It is like a portal between the two men, the door to a castle, they the queen’s entourage. The back seat is empty, a clean, soft green velour that holds the streaks of vacuum suction in sharp relief. The men smile at her. The way she smiles at a patient who she knows is going to die. Their eyes are the color of dead fish. Through them she sees herself from the thoroughfare: an Asian woman walking her designer dog, her hair pulled back, the white buds from an iPod in her ears. She hears their thoughts gnawing on her elbows and shoulders, tasting her skin, the whining stress of bones cracking. She feels bright and gaudy, like a diamond on the sidewalk. Cars punch by on the thoroughfare, each a small collision into her senses.

Her fiancé will be home from the hospital six hours from now, she thinks. So much will happen in the meantime.

“Jesus Christ, I told you I was coming.”

Yuri and the men turn toward the sound of a lady talking on her phone. She is hard and old. She is denim and platinum. She walks up the sidewalk toward the thoroughfare, and for some reason, Yuri thinks the woman is with the men, that they have been waiting for her. She tightens the slack on Dim-Sum’s leash as the woman rolls up on them, like the tide.

She passes. Yuri does not see where she goes. The sun is hot on her neck and cheeks. Her throat is dry. She coughs, taking a step, then a second step, away from the men, covering her mouth with her hand as if she is doing them a courtesy.

“You have lovely pets,” she says. Dim-Sum begins to pull her away. “Thank you for sharing them with me. There’s a liquor store a half block down—they’re nice Koreans—and they usually keep a trash can outside the door.”

“Thanks so much, ma’am,” Pastel Shirt says. He and Black Velvet spring to life, as if released from a trance, and climb into the van. They become indistinct to her, as indistinct as the minivan. She could never point them out in a lineup. She could see them every day or never. They will slip into the landscape, into the unending pulse of things harmless and dangerous.

“ One day I was walking my Boston terrier, Sophie, in the neighborhood when this minivan pulled up. Two very similar men got out, and a very similar conversation occurred, with me not really sure whether the men were dangerous or whether they were just lacking in social boundaries.

For good or for bad, having a dog leaves you exposed to the world because people feel a certain entitlement in talking to people who have dogs. Essentially, we are public property. And usually we are more than willing to comply, to showcase our furry children, or at least be gracious. But it makes one wonder if someone out there could take advantage of our social obligations. I love Joyce Carol Oates' 'Where Are You Going, Where Have You Been?' and I was excited to play with the ending of this story, one in which the reader is never sure of the men's intentions. You want to give everyone the benefit of the doubt, but as a woman, you don't really have that luxury. Ironically, neither Sophie or Dim-Sum, the dog in the story, were/are of any help in delineating friend or foe. ”