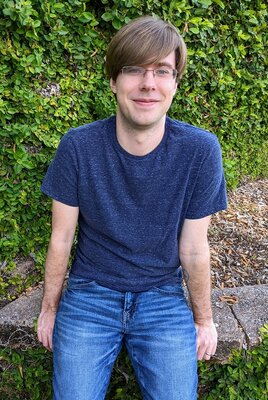 Cole Meyer is the editor-in-chief at The Masters Review. He received an MFA in creative writing from Florida State University and BAs in English and classical humanities from the University of Wisconsin. His writing has been included in the Best Small Fictions series and appears online at Aquifer: The Florida Review Online, SmokeLong Quarterly, Atticus Review, and elsewhere. Originally from Milwaukee, WI, he now lives in Tallahassee with his wife Emily and their dog and cat. More can be found at his website: cole-meyer.com.

Back then, you called the fort Camelot. We’d piked branches in the ground and then roofed it with a tarp you’d dragged behind your six-speed bike from your father’s shed. You were King Arthur and I was Sir Lancelot. We used to stage swordfights with stakes we’d stolen from a construction site on the other side of the woods, the hilts taped carefully with black electrical tape. For years, you narrated our fantasies, running through the woods, fighting off demons and goblins and whatever else you summoned to escape from home. And one day, lying in our fort in the woods, you told me your parents were splitting up.

Your dad wasn’t around much. Gone on business trips most weeks, to Hong Kong or London or Berlin. When he was home, you avoided him, a learned response to an unpredictable temper I never witnessed. Camelot was where you went to be anywhere else. So when you broke the news about your parents, I didn’t know how to comfort you. I thought it was a good thing, and I said so. There was a hole in the tarp, and it was raining, and I shifted away from you, angling under it, and tried to catch drops in my mouth. You rolled on your side and started to cry. I said that I’d read once that King Arthur’s parents were divorced, and you said I was a terrible liar.

At dinner time, you walked with me to the edge of the woods and when I mounted my bike, you grabbed my arm. I think I knew what you wanted from me and I didn’t know how to tell you it wasn’t something I could give. But I let you kiss me anyway. Then I pedaled off and avoided you at school and when I came back to Camelot, after weeks or months, you’d already torn it down.

Years later and a thousand miles away, I run into you in Jacksonville. The meeting isn’t entirely by chance, but still I almost don’t call out to you. You’re scouring the beach with a metal detector. You have a handlebar mustache. You’re a lawyer now. You’re married. I’ve been keeping tabs on you. I’ve seen this beach on your profile, knew you spent Saturdays here. My wife didn’t know I had an acquaintance in Jacksonville when I suggested the trip. She’s back at the hotel and you have an hour to kill so we go to a tiki bar for a drink. You show me pictures of your husband and daughter. She’s five, you say, and I nod like this is all new to me. I ask if you think you’ll build her a Camelot someday, and you look at me in surprise and say that you’d completely forgotten about that. You tell me your parents got back together, after you went away for college. Imagine that. Your dad started anger management, you say, and it’s actually working. A few drinks in, you spread out the day’s treasures on the bar. Some coins and a bottle opener, but the real prize is a small ring. Cubic zirconium. You invent a story where the elated fiancée discovers her beau’s deceit—You told me it was real!—and storms off. It feels good to laugh with you again. We order another round and the conversation spirals and I can’t find a way to ask what I came to ask.

Eventually, you stand to leave, and I just blurt it out.

Why did you tear it down?

You freeze, half out of your chair. Camelot? I don’t think I did.

You did and I never understood why.

I don’t think you want to get into this, you say.

But I pester you. It’s been eating at me for years. I say that I’m sorry for the way I reacted. I shouldn’t have shut you out. I was a dumb kid who needed time to really understand who you were.

You really don’t remember, do you?

And so you tell me about a day in the locker room, about a month after you kissed me, something I’d blocked out entirely. Some boys were picking on you. I joined in. I said your parents split because they found out you were queer. That your dad couldn’t take it.

And then it rushes back to me. How your face fell, how you took all the abuse that came after, because how could anything hurt half as bad?

You wave your hand. Just move on, you say. I did.

You leave then, and hand me the ring. You tell me I can pawn it for a few bucks to cover your half.

I sit there spinning it between my fingers, watching a pearl of beer slide down the side of your glass. I’d prepared a story for my wife, an explanation. How, completely by chance, I ran into an old friend. How we grabbed a drink and reminisced about the days we were knights. And if she asked why we lost touch, what would I say? That we grew apart. That’s how it goes sometimes. I think about what you’re going to tell your husband. That you ran into someone you used to know back home, and you’ll leave it at that. I tuck the ring into my pocket. I think about the stories we tell, how we shape and reshape our memories to smooth out the rough edges, to make a better story. What am I going to tell her now?

Once, there were two boys with a fort in the woods. That’s where I’ll start. That much at least is true.

“ ‘Camelot’ comes from a collection of linked stories that I'm working on, set in Southeastern WI. Other stories from the collection can be found at Atticus Review, Aquifer: The Florida Review Online, and most recently, Fictive Dream. ”