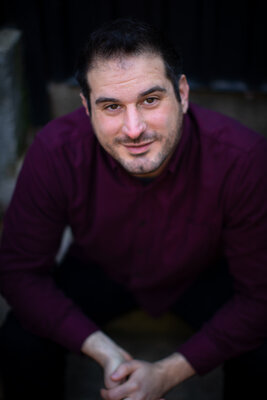 Kent Kosack is a writer living in Pittsburgh, PA. He has an MFA in Creative Writing from the University of Pittsburgh, where he teaches composition and creative writing. Kent serves as the Director of the Educational Arm at Asymptote, a journal of world literature in translation, and as a guest editor providing feedback on submissions for The Masters Review. His work has been published in Tin House (Flash Fidelity), The Cincinnati Review, The Normal School, Hobart, and elsewhere. See more at: www.kentkosack.com

Water boiled in the blue enameled pot. The man busied about the kitchen, a flurry of capability. A cake grew golden in the oven. Browning sugar sweetened the room.

From the breakfast nook in the corner of the room, the woman watched his movements. Her beer turned warm in the bottle. The leaves fell from the half-dead oak in the backyard.

Did you put the laundry into the dryer? The question came from him mid-flurry. He took a cleaver from the wood knife block and began dismembering a raw chicken.

And did you take out the garbage?

Were you planning on taking out the garbage?

He ignored her, tore the wings from the carcass, trimmed the excess fat.

She went outside via the back door. The air still and crisp. A whiff of sweet rot from the compost bin. She dragged the garbage to the curb and stood beside the hedge in front of the house watching him dump the chicken parts into a pot on the stove. Steam rose, wreathing his face, as the flesh hit the oil. He was smiling.

She reentered the kitchen via the back door.

Thank you. You do help. It’s the little stuff, you know.

The little stuff. Do. She didn’t like the sound of that auxiliary. Its connotation. She returned to the nook and watched. His amateur chef show, performed nightly for an audience of one: a seemingly random pile of ingredients chopped and sliced and stewed and roasted, transformed into a curry or a roast. Night after night, he fed her and her indecision.

Can you grab some kale for me? There should be some near the back fence.

She took a sip of warm beer, spat it back into the bottle, and headed once more toward the back door. She paused briefly in the doorway, as if unsure of whether to enter or exit, cold night or the warmth of the kitchen. The window was half opaque with the steam from the canning jars bubbling in the giant pot. Some sort of pickles, a preserved sourness.

The kale grew near the fence, the last holdout from the summer garden. Leaf by leaf she ripped the kale from the earth. Stubborn oak leaves clung to the limb above her, rustling in the wind.

I could use that kale. Especially if you want to eat sometime today.

She heard his words but understood only the tone, looking back toward the kitchen, the white light lashing out into the dusk around her, the window now completely opaque with steam, the frost-withered kale limp in her fist.

She knew what she had to do.