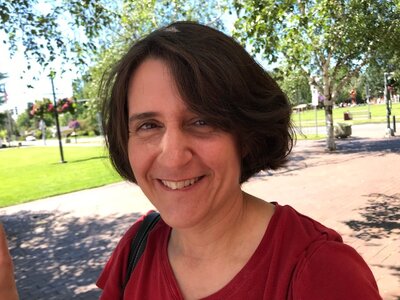 Heather Bartos writes both fiction and nonfiction. Her essays have appeared in Fatal Flaw, Stoneboat Literary Journal, HerStry, and elsewhere. Her flash fiction and short stories have appeared in Ponder Review, The Dillydoun Review, and others, and are forthcoming in Drunk Monkeys and Bridge Eight Literary Magazine. She lives near Portland, Oregon, with her family.

We lived in that gray, abandoned tower of an apartment complex, in a neighborhood haunted by sirens and infested with crack cocaine. There were echoes of random gunfire. There were bullet holes in the slide at the park. Two “ladies of the evening” lived upstairs. We told you they were teaching their furniture to dance.

Your dad drove a bus, taking tourists to restaurants where they dined at tables decorated with sweet-smelling roses. He came home to the stench of mold and sewage, the sneers of boys who thought they were men, the scratching of rats in the walls.

One day he came home holding a clear plastic bag. Inside was a glimmer of gold, the orange sunshine of California poppies.

You named your goldfish Johnny Cash. You sang to him and tried to teach him the alphabet. You drew pictures and held them up to his glass tank. When we had a freak blizzard, you dumped some snow in his tank so he could play. You wanted to give him a kiss so he would turn into a handsome prince.

One morning, Johnny Cash floated on the surface, belly up.

“Great,” I said. “Now we’ll have to explain death. You want to take this one?”

“She doesn’t need to know yet,” your father said.

He returned with another bag holding a flickering shape the color of those cheery little cheddar crackers served at Head Start. He gave Johnny Cash the First a burial at sea, honoring him with a two-flush salute.

“Johnny Cash has a lot of energy today,” you said later.

“He probably slept well,” I said.

Johnny Cash lived for 13 years. He was the longest-lived goldfish ever. You took him to Show and Tell every year. Johnny Cash watched you outgrow bathing suits and Barbies and your first boyfriend. You stopped drawing pictures for him. You stopped wanting to kiss him. Even then, your dad reincarnated him in heat waves, in snowstorms, and once before a hurricane—that shimmer of hope like a new copper penny.

One morning, a few days after your dad’s funeral, Johnny Cash died too. And even though you had not, could not cry for your dad, you cried for Johnny, and I wanted to tell you they were the same, that lucky streak of light, bright and golden and good.

“ ‘Goldfish’ started out as an anecdote in a short story I had written, where a mother reflected on the actions of a father to protect and take care of their child. Later, I thought about taking just the memory of the goldfish and breaking it out into a separate flash piece. Goldfish remind so many of us of childhood—not just the crackers, but many kids also have goldfish as their first pet. I added a setting—an inner-city neighborhood—where death was probably more common, and where the father would be more protective. The idea of replacing the fish over and over throughout the girl’s childhood came to me while I was writing, as did the ending. To me, the story is about the often unseen ways our parents love and protect us. ”