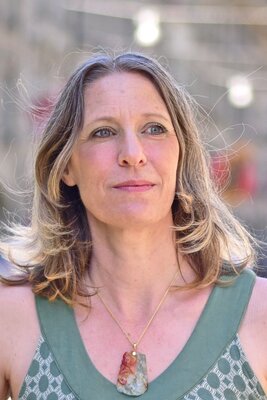 Jennifer Saunders is the author of Self-Portrait with Housewife (Tebot Bach, 2019) and a Pushcart, Best of the Net, and Orison Anthology nominee. Her work has appeared in The Georgia Review, Grist, Ninth Letter, The Shallow Ends, and elsewhere. Jennifer holds an MFA from Pacific University and lives in German-speaking Switzerland where in the winters she teaches skating in a hockey school and drives her hockey-playing children to many, many ice rinks.

That night, I discovered the alligators’ snouts poking through the ice and icicles slicing the orange groves. That night, I herded the geese into the house and locked them in the bathroom with a tub full of tepid water; I led the lamb to the living room and piled hay in the corner. I tilted lamps towards the goldfish bowl and in the kitchen moved all the bread to the refrigerator because at least there it wouldn’t freeze. I was long past dandelion season and wondered if it would return with its salads and wines, its poultices to draw poison out of my wounds. I boiled a pot of coffee and circled the house from slowly running tap to slowly running tap, drip-drip-drip against the freeze. From the closet I hauled down afghans my mother had crocheted, covered my shoulders, resumed my rounds. The geese, the pipes, the goldfish, the lamb— they made it ’til morning, I remember that, and when I went back down to the water the snouts were gone and the holes in the ice were empty halos shining on nothing.

“ ‘Deep Freeze’ developed out of a prompt I received from the Two Sylvias Press online poetry retreat to open with the phrase ‘That night I found the _______’ and use as many nouns from a given word list as possible. The challenge to include words like ‘alligator,’ ‘dandelion,’ and ‘refrigerator’ in the same poem pushed me into a more surreal and associative mode than I usually write in, and I had a lot of fun letting my imagination wander. But to this day, I’m still disappointed that I couldn’t figure out how to fit ‘pogostick’ into my poem. ”